Ibrahim Mousa (1972) is a very talented Palestinian-Dutch dramatist, director and playwright. In 2002 he came to the Netherlands to pursue his passion: the theatre. In 2006 he graduated from the HKU as a theatre Maker. 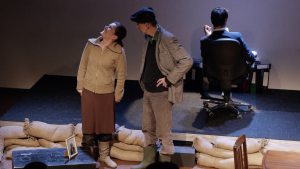 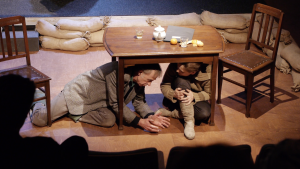 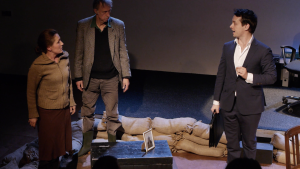 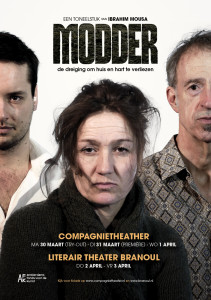 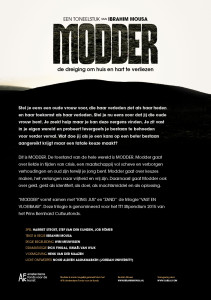 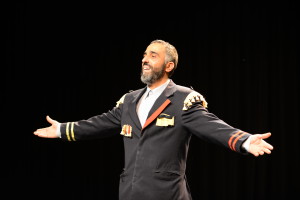 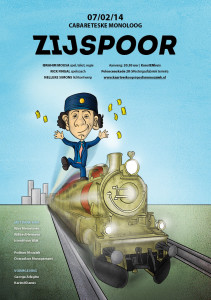 When I was young, I lived in Kuwait and I used to go with my family in the summer vacation to visit my grandparents in Palestine. We weren’t allow to live there but we were allowed to visit our families in the west bank. Everybody knows that Palestine is under the Israeli occupation. The occupation decides the game and the rules of the game. Nobody can stay in what they called “their own territory” because of that the Palestinian outside remain where they are and who remained inside “the territory” remains inside. The only way to keep the link between the families from both banks was “a permission to visit” if you have family from the first degree! That was the situation in Palestine back then. So my parents could use all the chances they had to go and spent time with their parents, my grandparents.

When I was 12 I went with my family in the summer vacation to visit my grandparents in the west bank Palestine. That year was a good year for my father. He invested with a good friend in a restaurant and he couldn’t go with us. He sent us with the plane to Amman Jordan and that was my first time that I flew, that was exciting as well. After a long journey from Jordan to the west bank through Al-Hussein Bridge to the Israeli check points and the misery of the check points, finally we arrived in Si’er the village of my father. The second big town in AL-Khalil (Hebron) province. There lived my grandparents. Si’er means in Arabic Jahananm (Hell) and it is so. Why is it so? Because the people of this town have a very difficult mentalities and strange rules! My father said to me that the people of Si’er when they wanted to leave the town, they would close their minds with a key and threw it away because they were afraid that their mentality would change!

I was always excited to go there because I would spent a lot of time with my grandfather Ibrahim. I carry his name. he was a good man. He knew his god very well and spent the rest of his life serving one of the 3 most holy places for Muslims Al-Aqsa mosque. He worked as a guard for the holy mosque together with others guards. His work was guarding the Aqsa mosque from the inside after the night prays. He would wait until the mosque was empty and then he would jail hem self inside the mosque. While he was inside, he would check the place and then he spent his time praying for the good of the human being. After the prays he would go to sleep in his room inside the mosque.

My dream began that vacation when I went to visit my grandfather Ibrahim the father of my mother in Bethlehem. His name is also Ibrahim. It was on Friday and he wanted to go and pray in the Al-Aqsa mosque in Jerusalem and at the same time he would like to visit his old friend Ibrahim my grandfather from Si’er. He asked me if I would like to company him to Jerusalem. I didn’t hesitate and I went with him to pray in Al-Aqsa mosque in Jerusalem.

That was the year when Beirut was exploding from pain and sadness and the rest of the world was watching the world cup in Spain! I went with my grandfather from Bethlehem to Jerusalem. There we met my other grandfather Ibrahim and we went to pray together. After the Friday prays the father of my mother asked me if I would like to stay with my grandfather Ibrahim in Jerusalem. I said yeas and I spent my day with my grandfather Ibrahim. The first thing what we have done was a tour through the holly place inside the old city. He introduced me to his colleagues with a proud that my grandson would spend this night with me. After that we went to the church (alqiyamah) we visited the guards of the church and we drank a thee with them. At the ends of the day we went to eat with other guards of Al-Aqsa till the night prays.

After the night prays, everyone went back to their homes and I remained with my grandfather inside the mosque. my grandfather closed the door from the inside and he began to show me everything inside the Aqsa mosque. that was beautiful, something I couldn’t imagine and I guess a mature man could not imagine he would live those moments. When we felt tired we went to sleep in his room inside the mosque. we walked through the mosque under the tribune (manber) of Saladin and we walked through a huge hall with high ceiling, if you look up you could reach with your hand the ceiling and you had the feeling that you were touching heaven. While we were walking towards his room, I could smell the dust of the history inside the mosque. I could feel myself that I landed in a amazing fairytale. on the two sides of the hall there were huge doors, closed doors and that made it more exciting for an 12 year old boy. At the end of the hall we reached the last door on the right side of the hall and that was my grandfather’s room.

I entered the room with my grandfather holding his hand. I was so exciting and in the same time I would like to see more of my grandfather’s room. The room was huge and with a lot of books shelves on the two sides of the room. In the middle of the room was the bed of my grandfather standing nearby a small window located to watch beautiful scene of Jerusalem. I looked from that window for a long time because I would not have the chance once again to live this dream. When I went to bed I slept on the side of the window and I kept looking until I went in a deep sleep. I slept while I was breathing the dust of the history and my eyes were capturing the scenes of the small windows like a film camera.

At dawn we woke up and we went to open the door of the Aqsa mosque for the dawn prays. People of Jerusalem came to pray and it was also amazing to see that the mosque was almost full from the believers. After the prays the mosque was empty and we closed once again and this time we slept beside the door of the mosque from the inside. There was a wooden chair and I slept with my grandfather on that chair. This time I slept with other excitement. While I was trying to sleep I was watching the sunrise from the colored windows of the mosque. in the same time there was a music. A music concert of small black birds with two tails. To be honest with you I didn’t know what the bird’s name was, but the sounds of the birds flying inside through the colored rays of the sun made me awake because I would not want to miss this beautiful and amazing concert of god!

At the end of this wonderful journey we went to eat our breakfast in a small restaurant in the old city after that we went back to Bethlehem where my mother was visiting her family. I have seen a lot in my life and I lived a beautiful moment in my life but such a journey I had never expected that I would live that moments with my grandfather Ibrahim. Since that moment I have considered myself lucky and blessed by god and heaven to live one night of my life inside one of the 3 holy places for the Arabs and the Muslims.

I have lived a fairytale, a wonderful one and I’m still seeing it in my dreams. It was great feeling something you have to live it to tell it and I lived and I tell it to everybody. I wonder if this dream will become one again real and I can spent one night inside Al-Aqsa mosque. nobody knows except for the one who knows more that the human being.

On 06-10-2009 starts the theatre maker Ibrahim Mousa with his new theatre play called “platform 14A” this is solo performance made, played and directed by Ibrahim Mousa.

the play will take place at the main centraalstation of Amsterdam city. this play will be presntation for work in proces.
Platform 14A tells the dailly story of a service worker at the train centralstaion.

this play is about misunderstandings, miscommunications, and the ability to ignore the other. Platform 14A is also about coming and leaving, going away and coming back. its also about what is the differance between the life as centralstation and the life as between stations. finally, its also about meeting your love at the end of day.